Types of Tactical Slings & Why You Should Use Them

In theory, one does not really need much from a rifle. Its primary purpose is to shoot projectiles. Therefore, the only things you need to own are ammunition and a gun capable of loading and firing said ammunition. However, some people, particularly those involved with law enforcement or competitive shooting, want more. For these folks, and anyone else looking beyond the basic experience, there are countless ways to upgrade your rifle.

One of the most useful rifle enhancements is also, we contend, among the most underrated and least understood. Some features and accessories help to counter recoil, improve aim, or increase shooting speed. All those improvements are great, of course. With that said, the tactical sling has an invaluable function that makes it a must-have for anyone who takes their shooting ability seriously. We will explain why over the course of this article, and also describe the different types of tactical slings out there.

Why Have a Tactical Sling at All?

When people think of owning a rifle, they usually think about how they will look, move, and act when firing it. Such moments are often dramatic and consequential, so this focus only makes sense. Still, one should consider what they will do with their lengthy, bulky, heavy machines when not using them. Will they keep pointing it forward, hoisting it with both hands? Will they grab the rifle butt and let the rest dangle?

The simple fact is that there are no holsters big enough to sheathe a gun as large as that. Rifle fans must resort to a different solution for lugging their weapons of choice around. That solution is the tactical sling, a kind of harness that basically allows a person to wear their rifle on their body. They can distribute much of the weight away from your hands and onto your shoulder.

This set-up comes with a few clear benefits. When you are in situations where you may have to use your rifle, it is always within your reach and never out of your sight. When not firing, pointing, or otherwise holding the gun, your hands are free to do anything. You can reload the ammo, clean the muzzle, remove a part, and eat a sandwich, all without taking off the rifle. Tactical slings are, in short, indispensable.

Even when engineers and enthusiasts hit on a great idea, they seem to never stop tinkering. Over the years, they have devised a few different types of tactical slings. Although some are more common than others, there is no “best kind.” Each type has its own uses, advantages, and disadvantages, which we will describe below.

The most common type of tactical sling is the two-point sling, named for the pair of attachment points in its design. One grabs onto the stock while the other clips to the handguard. Both go close to where you normally put your hands when using the rifle. They are relatively easy to adjust, work around, and wear. They also make it simple for you to fire from various positions without having to put the rifle away afterward.

Three-point slings are almost identical to their two-point counterparts. The difference is that they have a third strap running between the front and back clips. This addition can tighten the rifle against the wearer’s body. When you want to wield it, you can quickly ready it. When you do not want to use it, you can let go with less worry of dropping it or accidentally pointing the muzzle at yourself.

Even less common than the three-point sling is the single-point sling. Slings of this type include just one clip that can connect to the rifle, allowing people to wear it even when not toting their rifles. Another convenience from this design is that you can easily switch the shoulder from which you hang the sling. When one gets tired, just shift it to the other and take turns in bearing the weight of the rifle. 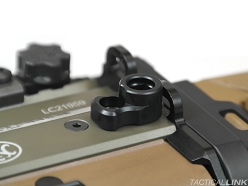 Factors to Look For

Before you purchase a tactical sling, you may want to try it out — and not just for size, either. Different types of tactical slings can make for different experiences in handling rifles. You should choose the type accordingly based on your own handling preferences. To help you make your choice, here are a few factors worth considering.

How quickly can you fire your weapon when wearing one kind of sling versus another? How much does the sling let you move your arms, your hands, and your shoulders? Can you swing your torso around without getting the straps caught on your shoulder? Ultimately, you have to choose the sling that works best with your shooting style. Obviously, that can vary on the environment and the circumstances, so you may want more than one for different occasions.

The Positioning of the Rifle

Moments of idleness may be just as important to consider as moments of action. Some slings are better than others at keeping the rifle out of your way when you are not using it. The single-point allows the gun to dangle, which is fine in target competitions and other situations where you do not need to move much. If you are hunting or doing something else that involves running, you may want to wear the tighter two-point or three-point sling instead.

You just know that a place called Tactical Link would be happy to offer anything with the word “tactical” in its name. Beyond that connection, we also recognize that tactical slings truly live up to their name, serving rifle users well in any situation. Our selection of high-quality harnesses includes the three aforementioned types of tactical slings, as well as convertible and vest-integrated samples. We even provide sling mounts, among other parts and accessories. We know that the only things you need for shooting are working rifles and suitable ammunition. Like any true professional and enthusiast, we also know that you can get so much more out of a rifle with upgrades like these.